How to effectively deal with bots on your site? The best protection against click fraud.

Short stories are usually used as a source of inspiration because the story is interesting. In the short story there is wisdom that the reader can take. This is because of the nature of good and evil so that it can be judged. Here we will give examples of short stories of everyday life.

Short stories of everyday life are often liked by readers, both teenagers and adults because the stories are light and very related to our lives. For that, we immediately give examples of short stories of daily life suitable for study.

That weekend was the worst night for Lani. He had to get news that his grandfather had passed away. Even though there are many precious memories and fill his days to this day.

In the past, Lani's grandfather had accompanied her as a child. Her mother and father were always busy at work so there was no time to play with her until Lani was a teenager. However, not so with the grandfather.

That night, Lani remembered her childhood when she played hide and seek with her grandfather.

"Grandpa.. let's play stealth. Grandpa in hiding, I'm looking for. I'm the one who counts it."

Lani's crying voice was heard to the grandfather's hiding place behind the living room door. He immediately came out to hear his grandson crying and screaming.

"Grandpa where are you from? I thought I'd be alone. If grandfather goes missing, who will accompany Lani again? Lani can't play without grandpa, Lani is lonely," she cried.

"Relax my grandson, grandpa will accompany you until you grow up. Until 100 years later.. hahaha," said grandfather.

"Liar .." Whispered Lani who is currently languishing in her room after the departure of her grandfather. He died after being confirmed with cancer that he had suffered for 2 years.

Not long after, mother came in and gave Lani her grandfather's photo album.

“Look at my son, he keeps this photo album. For him, this is a valuable thing you have to see, "said the mother.

At first, he ignored it, but out of curiosity, he opened the album. There is a photo of the grandfather laughing out loud while holding himself as a child. There is also a small photo of him counting down while playing hide and seek.

Seeing that brought tears to his eyes. "It's true what grandfather said, he was always with me. Grandpa's smile will be etched in my heart," he said.

School exams are coming. Every time there is an exam there must be a tradition of cheating that is always attached to students. Here, honesty is at stake. Many of my friends cheat in various ways, from carrying small notes to working together to answer questions.

"Ben, do you want to cheat or not? Here I have a small note. But don't be obvious later in the exam," said Beni before the exam took place.

There, my faith was really tested. Seeing my friend who brought a lot of cheats made my heart shrink a little.

"What's the point of studying if in the end it's the people who get a score of 100 who cheat," I thought.

However, I quickly dismissed the negative thoughts myself. I was taught not to cheat by my mother and father. They taught me to always behave honestly in all conditions.

The exams arrived at that time, many friends carried out their actions to cheat when the supervisor was off guard. Many are nervous about issuing books to cellphones. I just focus on doing the problems without caring about them.

Time was running fast, only one minute left. Luckily I managed to do it although I don't know for sure if my answer is right or wrong. After the exam, many of my friends are still worried about the answer.

"It's crazy because it gives me a headache... How come my notes don't help at all," said Zulfan.

Announcement of test scores arrived. I looked at the nameplate and it turned out that my name was in the top 3 rankings. Meanwhile, my friend who cheated was in the lower rank.

"You know that, we don't have to open cheats, okay? I really regret why I didn't read it, because I wasted time looking for answers," said my friend, who regretted his actions.

Now I realize the meaning of honesty. No matter how sweet the lie is, it will taste bitter in the end.

3. Examples of Short Stories in Daily Life: My Friends My Fans 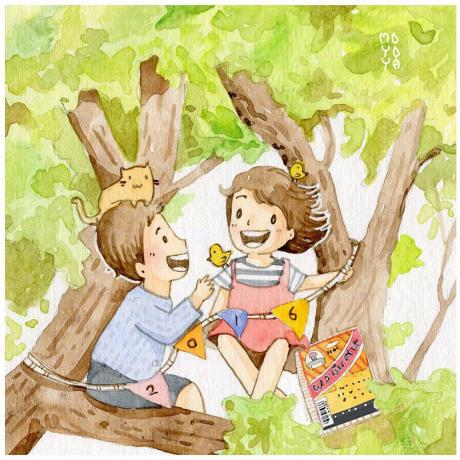 I am a student at Matahari Middle School. I want to tell a little about my past meeting with those who are now my best friends. Starting from the school building, I met Violet who was playing badminton at that time.

Yes, I am a fan. Initially, I first saw him in the badminton championship. With his fiery spirit and good way of playing, he managed to rank one at the national level.

This motivated me to be able to enter badminton extracurricular and I finally registered today.

At first I didn't know him, but I ventured to get acquainted because of my admiration for the way he played.

"Hi I'm Yeni. I just saw you playing badminton. Damn, that's really cool. I can teach you," I said.

"Hi Yeni, I'm Violet. Then, let's have a match. Later, you will also be smooth and can play like me, "he said.

We ended up dueling. It was fun playing with him. It didn't feel like it was already evening, we were sweating profusely. Because we were tired, we rested while leaning against the wall.

"You have fun playing too. You're not too stiff, you must have learned badminton before, right?," Violet asked.

"Yes, I learned from my father. But, yeah it's just unprofessional. I just entered badminton extracurricular today,” I replied nervously being next to the person I admired.

“Wow… it's the first time I've entered extracurricular, isn't it. No wonder I've never seen you before. If I value your game as a beginner, it's okay too. Just sharpen it. You just can be better than me," he said with a smile.

Hearing that statement made me incredibly happy. I'm getting more and more motivated to be able to compare with him. I decided to work hard. I never missed a day to come to practice.

Violet and I are also getting closer. He is basically a good boy and is not stingy in sharing his knowledge. Luckily I became his fan and I don't regret the first time I ventured to get to know him.

Now, I'm not only a fan, but also a friend of Violet. We also support each other when participating in championship competitions.

Those are some examples of daily life short stories that you can use as lessons in life or can be used as inspiration to make short stories for school assignments. I hope this helps.