Definition of Status, Social Role and Social Class – now we will discuss about status, social roles and also social class. There is so much we should know about social or socialization to fellow living things.

Below will explain the meaning of social status, social roles and also social class.

Social status or position has the meaning of having a person's place or position in a certain position social groups and society in general and have relationships with other people in their environment.

Social role has the meaning to carry out the rights and obligations of a person based on his social status.

Social class itself has the meaning of human groups and occupies a social layer according to the criteria of economic class.

Definition of Social Class According to Experts

The following is the definition of social class according to the experts.

Kornblum has a definition of social meaning that has similarities with caste, the difference is only determined according to economic criteria, such as work, income, and also prosperity. In general, social classes have an open and non-homogeneous nature which means mobility both up and down between these classes.

Max Weder has a definition of making a difference based on economic class and also social position. However, the term social class is still used for all circles. Where the class that has an economic nature is further divided into three sub-classes and then selected according to the adequacy of the economic field.

Social position can occur because of the social environment, rights, obligations and achievements. Everyone can have several social positions in society because they can participate in various patterns of life at once.

Like, a young man named Rudi from Podomoro Village who has a mix of all positions as the youth leader in his village, exemplary students at the provincial level, prospective computer graduates, and prospective husbands from the daughters of college friends from different majors with himher.

If each individual has carried out his obligations and also asked for rights according to the social status he has and is also carried by him, his role has been carried out accordingly. Where the role has its origin from the pattern of association.

So that the role can determine what will be given by the surrounding community. The role among the community is considered very important because it can regulate someone in society in accordance with the norms that exist in society. 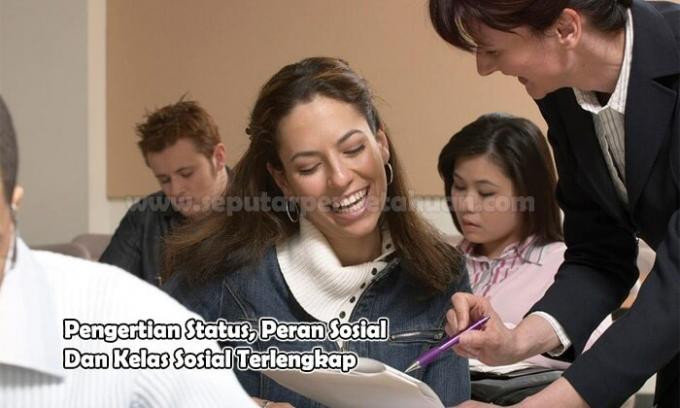 Social class can indicate differences in hierarchy or levels between individuals in society. Social class has different meanings in every society and also in every era.

But the social class of society can be determined from the level of income, power and education. For example, the upper class, the rich who have higher education and also have power, the middle class, and also the lower class.

A few explanations about Definition of Status, Social Role and Social Class. An explanation of social status, social roles, and also social class where social status is determined from the economic status of the each individual not only from their economic status but from a high level of education and the power they have, hopefully useful