To better understand, please read the reviews below carefully.

Illegal levies (Pungli) are actions taken by a person or civil servant or state official by asking for payment of money that is not appropriate or there are no rules related to payment that. It is usually equated with acts of extortion, fraud or corruption.

According to Wikipedia, illegal levies are the imposition of fees in places that should not be charged or collected. Often extortion is carried out by officials or government officials.

There are several factors that cause someone to commit extortion, including:

Article 368 of the Criminal Code
Whoever with the intent to benefit himself or others unlawfully, by forcing others with violence or threatening violence to give something goods, which wholly or partly belongs to another person or an attempt to provide debts or write off receivables, are threatened with extortion, with a maximum imprisonment of nine year.

Article 415 of the Criminal Code
A civil servant or other person who is given the task of carrying out a general position continuously or temporarily intentionally embezzle shrimp or securities that are kept because of their position or carry out confinement the money or securities are taken or embezzlement by another person or assisting as an assistant in carrying out the said act, is punishable by a maximum imprisonment of seven years.

Article 418 of the Criminal Code
A civil servant who receives a gift or promise even though it is known or ought to be suspected, that the gift or promise was given because power or authority related to his position shall be punished by a maximum imprisonment of six months or a maximum fine of four thousand five hundred rupiah.

Article 423 of the Criminal Code
The civil servant in question benefits himself or others against the law by abusing his power forcing other people to surrender something make a payment, make withholding of a payment or perform a job for one's own person, shall be punished by a maximum imprisonment of six year.

From the criminal provisions above, the crime of illegal levies can be charged with the following criminal acts:

Fraud Crime
Fraud and illegal levies are criminal acts where there are elements that are the same and are interrelated, among others, to benefit themselves themselves or others against the law with a series of lies to or so that other people give goods or something else to her.

The Crime of Blackmail
Fraud or clay levies are criminal acts in which there are elements and are interrelated, among others, to benefit oneself or other people by violating the law with a series of violence or by threatening other people to hand over goods or something to her.

Corruption Crime
The criminal act of corruption is very closely related to the crime of office, because the formulation in article 415 of the article on embezzlement in the Criminal Code was adopted by law. No. 31 of 1999 which was further amended by Law no. 20 of 2001 which is contained in article 8. 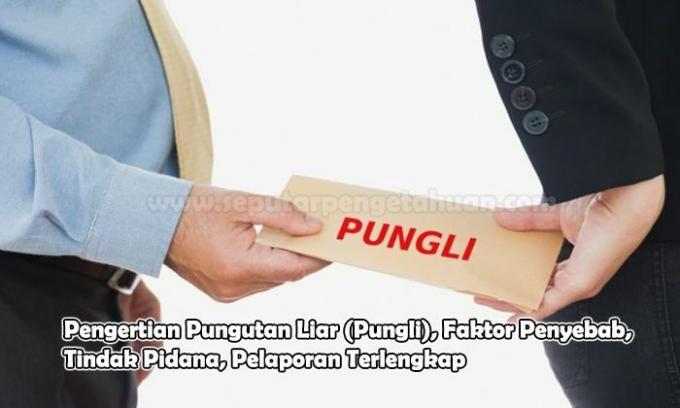 If you find illegal levies (extortion) immediately report it to the following connection:

Thus it has been explained about Definition of Illegal Charges (Pungli), Factors, Crime and Reporting, hopefully can add to your insight and knowledge. Thank you for visiting and don't forget to read other articles.